There are two main pieces of the integration -

In order to connect to the MyLaps Timing & Scoring software, we need to know two things when setting up Streams in RaceDay Scoring.

When setting up the exporter in Timing & Scoring, this would be our suggested default settings.

You do not have to check the box to "Export Markers", but if you do RaceDay Scoring will bring in an assign Marker Reads to Event Start Times that have not yet been set. 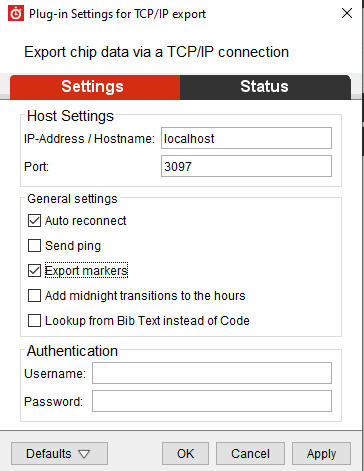 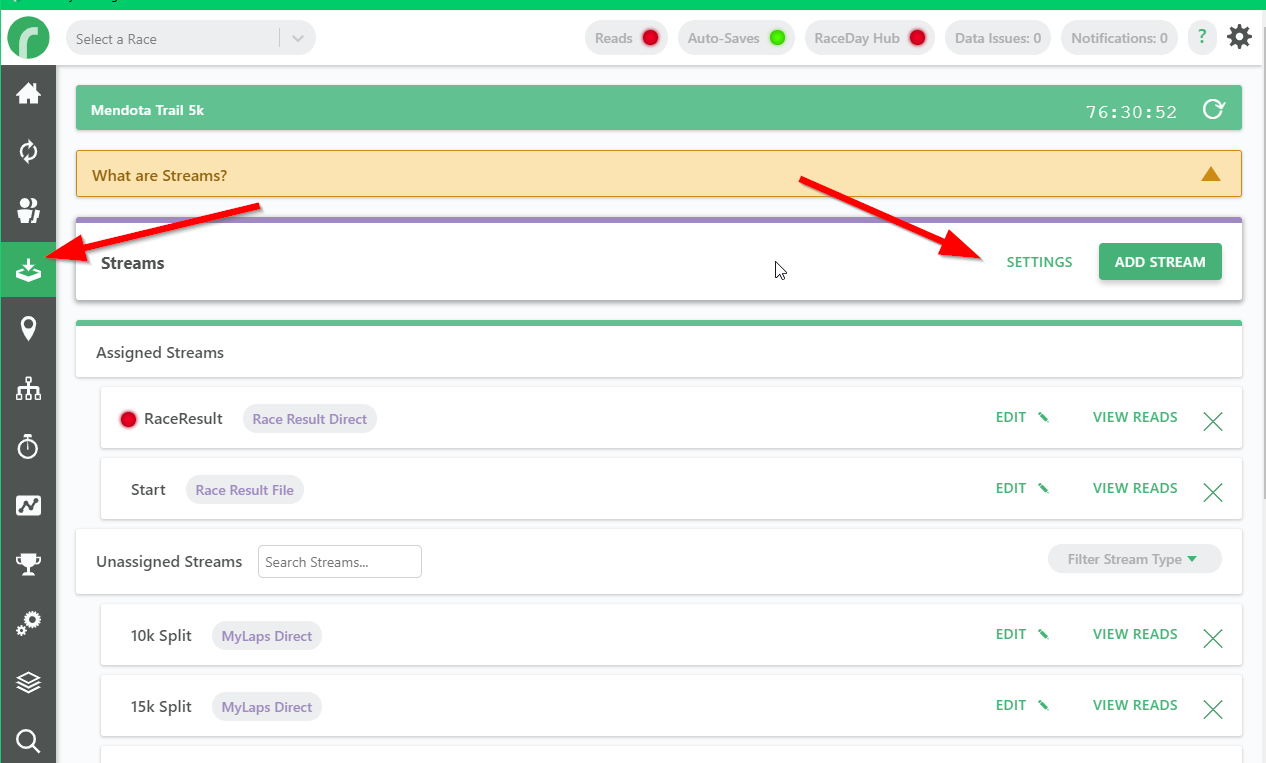 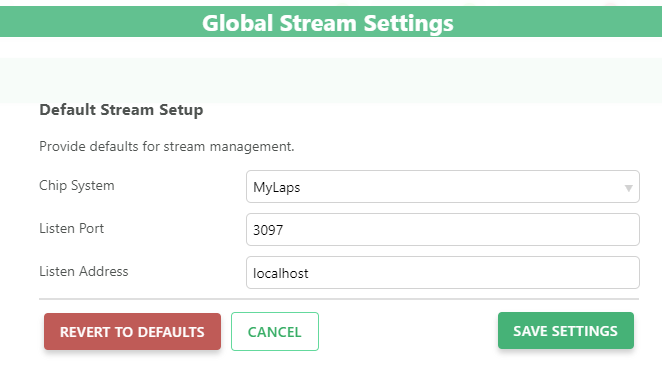 Now that you've set your default MyLaps configuration settings like Port and Address, you should create a Stream in RaceDay Scoring for each Timing & Scoring Location you are using for this Race.

When you connect to Timing & Scoring directly, data from all decoders comes in at once and RaceDay Scoring needs to know how to split up those reads into different Streams that you will use in different Locations for your Race.

To do this - we use the MyLaps TIming & Scoring Location Names that your Decoders are assigned to.

You can access the Stream Setup by going to the Streams item on the left hand toolbar: 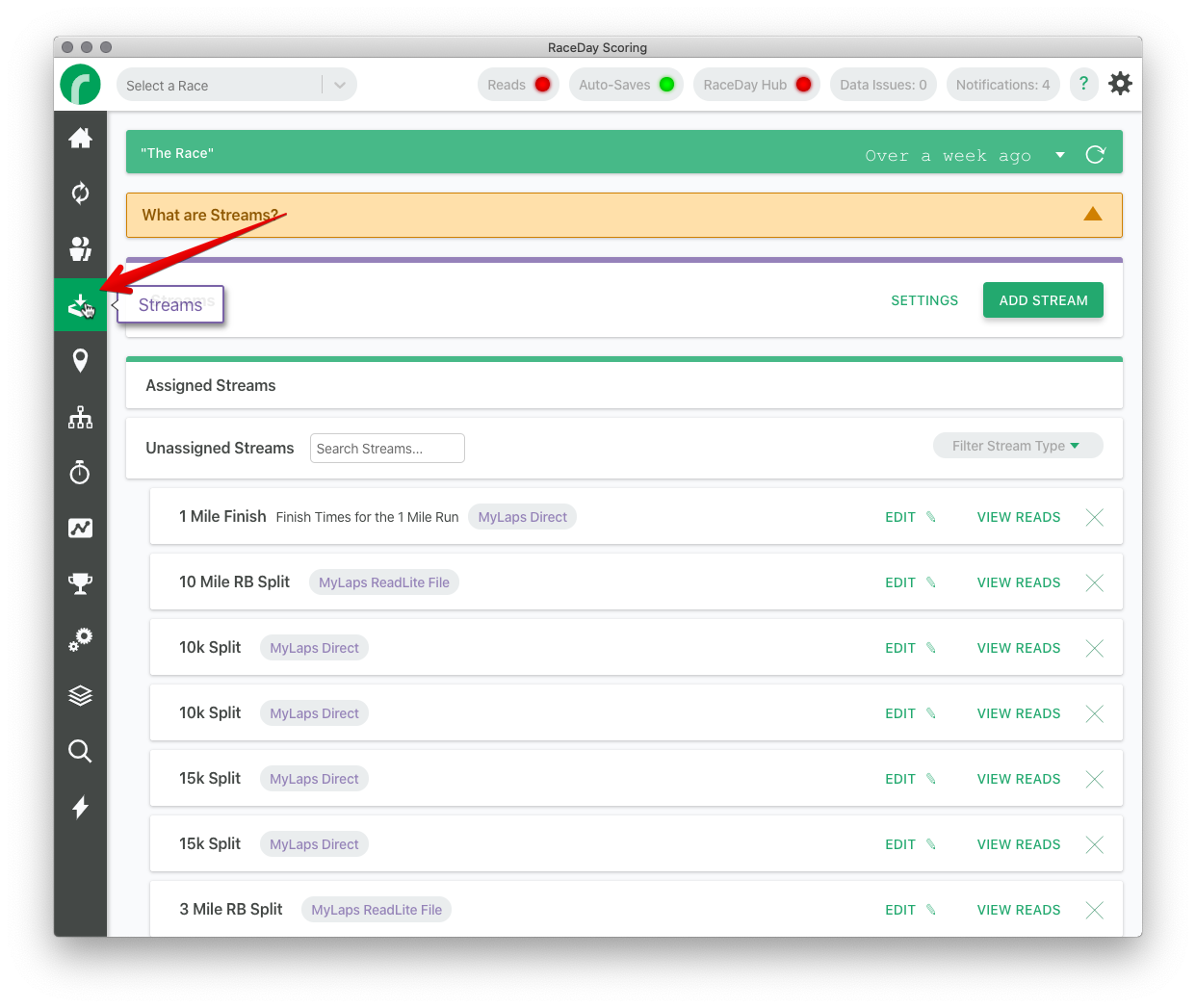 Click the “Add Stream” button to begin creating a new Stream for you to use for your Races. 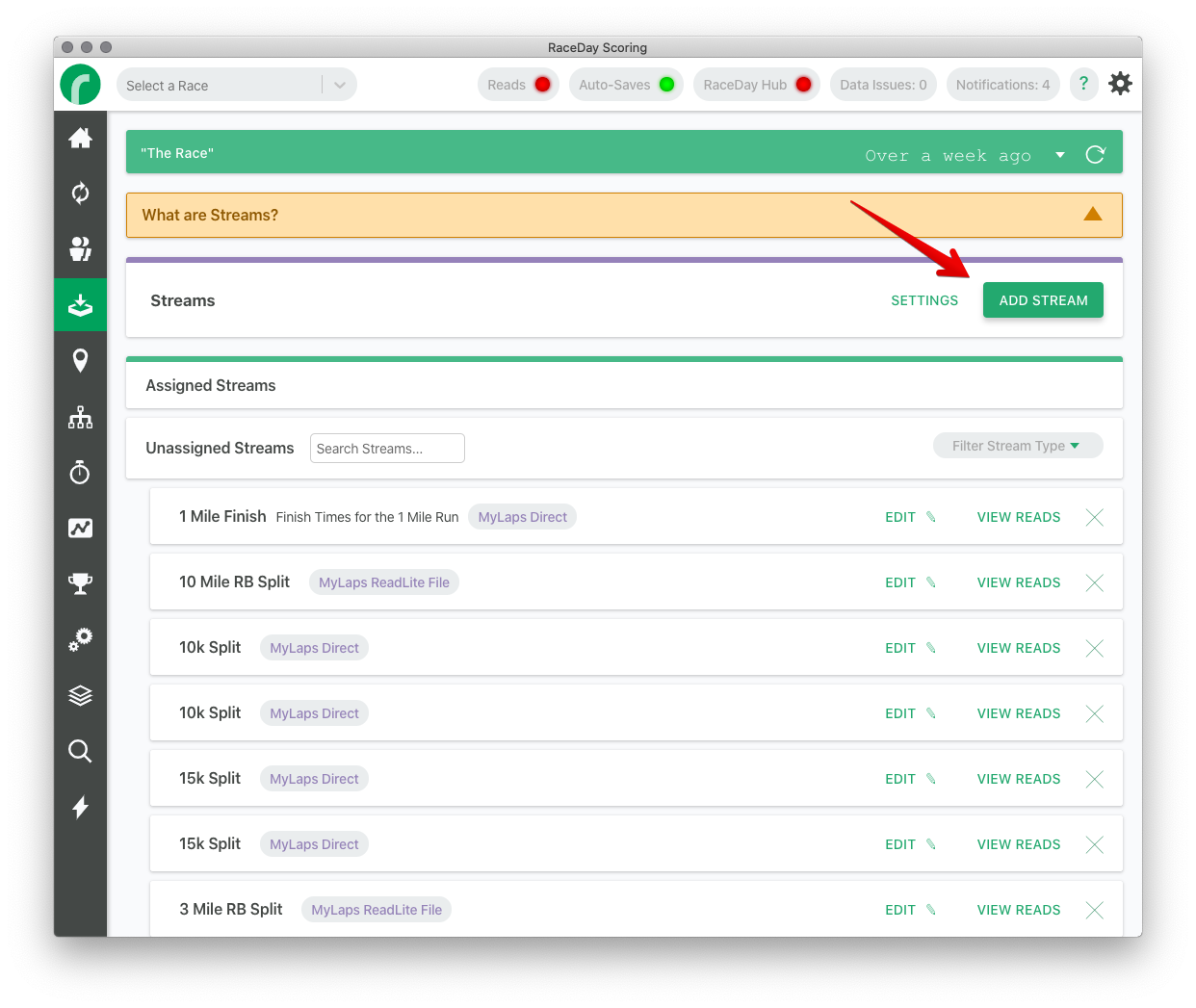 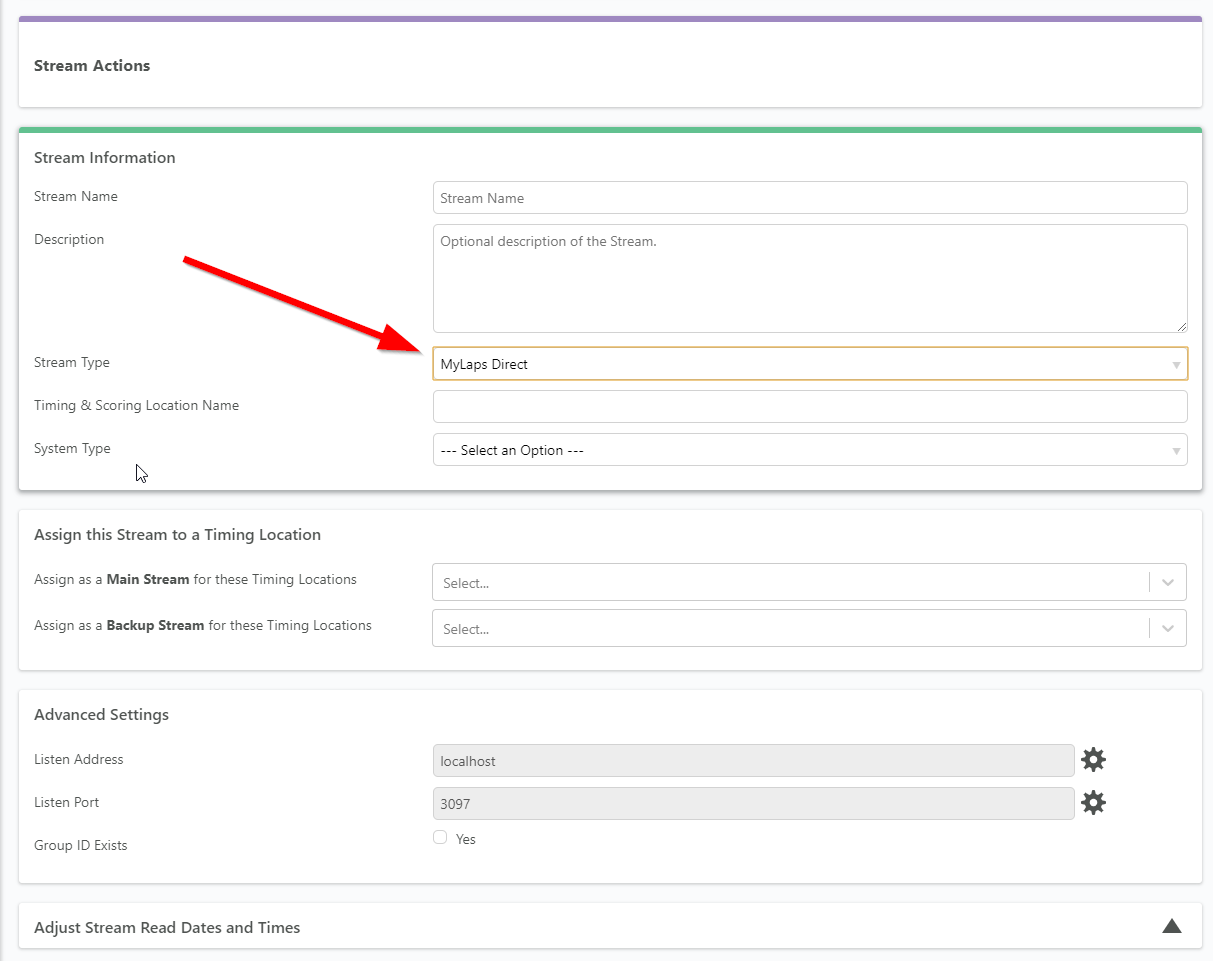 And fill out the configuration needed. Be sure to set a Name, Timing & Scoring Location Name, System Type, and Timing Location Assignment (optional right now, can be set later): 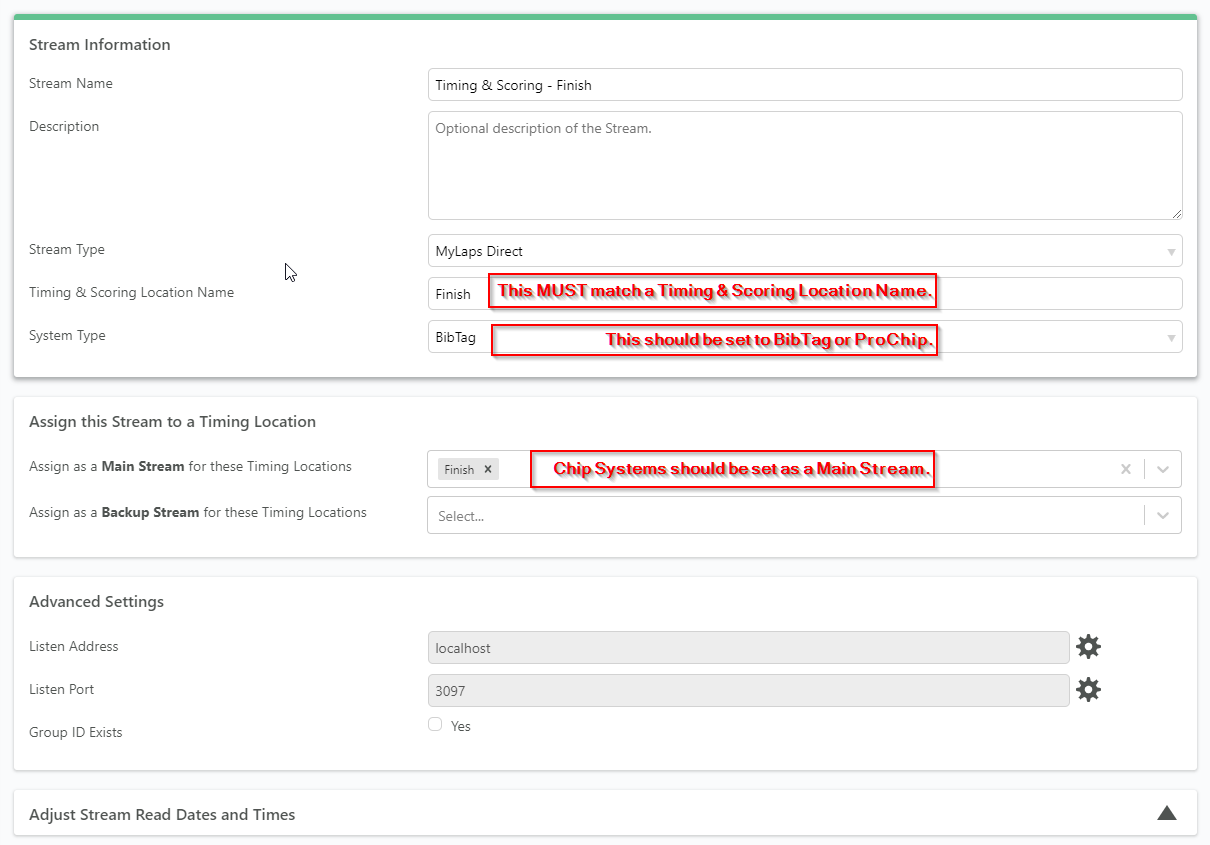 It's recommended to set up a Stream in RaceDay Scoring for each commonly used Timing & Scoring Location Name you use - like Finish, Start, Split, etc... then when you need to use it for the next Race you can just assign that existing Stream and will not have to go through the setup again on that computer.

Once you have these items set you can being collecting reads as described here.