started a topic 10 months ago

How do you simulate a race to practice settings and make sure all is working correctly for race day?

There are a few things that you can do to test your race files. It does depend a bit on what you're doing and how involved your configuration is. Keep in mind that RaceDay Scoring does not publish results to RunSignup automatically, so feel free to mess around with reports and add fake results as much as you want as they won't be pushed to RunSignup unless you start your RunSignup Auto-Saves.

This is especially important if you ever are using the Participant Filters area to customize a Report to filter out some participants, or if you want to see what the layout looks like. Simple edit a Report under Reports > Actions > Edit, open up the Sorts & Filters panel and check all of these boxes so that everyone who could potentially get a time will show up in the report: 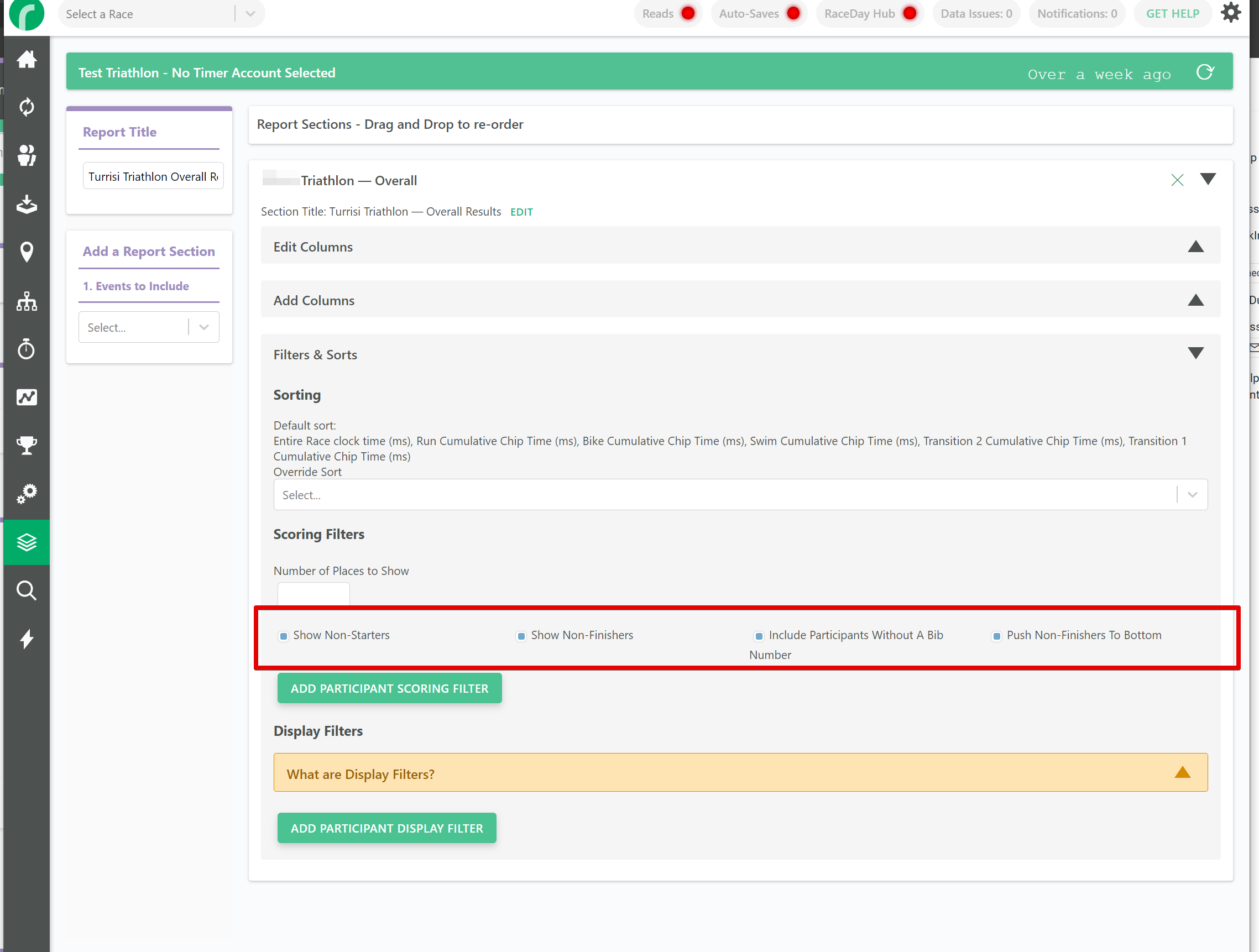 The most important thing to test when you are first starting with RDS is to make sure that you have your Streams set up correctly so that the data that comes from your actual readers is accepted. For this you will want to do the "driveway test". Set up your readers, start collecting reads, and see what happens when reads are imported. Are you seeing Raw Reads in RaceDay Scoring? Are they matching to participants in the Raw Reads view, or are they all showing as unknown? Once you have confirmed that Raw Reads are matching to Participants correctly you have confirmed that your Stream setup is correct and will work going forward. This is likely not something that you would want to do frequently, it's more useful when you are just getting started, and when you are dusting off your hardware in the Spring.

The next thing to test is your time filters on your locations. First, just look at the Dashboard and visually verify that the collect times until/starting at date/times are correct:

Once this looks good, I usually will write down some reasonable looking times for someone that I'll add as Raw Reads manually to make sure they are selected as I expect.

So maybe for a triathlon I would write down something like this:

Then I would enter those all into Raw Reads by clicking the Raw Reads Count and opening up the "Add Raw Reads" panel. Obviously you'd need to make sure that you have this bib number assigned so the reads will be accepted. 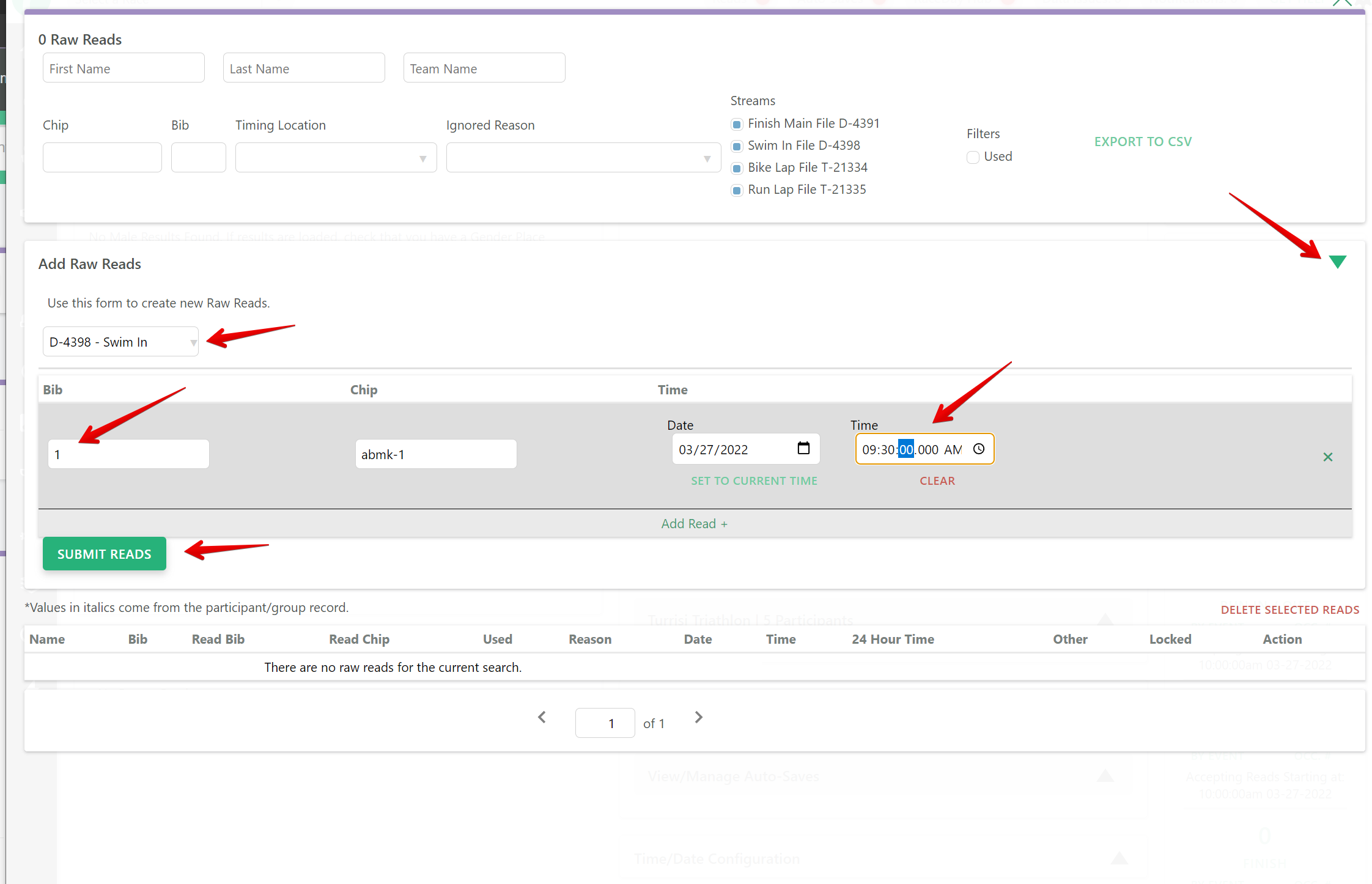 Make sure that all the reads you have manually added were selected as "Used" by the system. At this point, you should see results for the Participant as long as you entered a finish time.

If you want to we also have a way to generate fake reads, but personally, I prefer writing down what I think to be realistic times that could happen for a few bib numbers in different events and entering them in manually. When you use the Timing Location > Settings > Generate Test Reads function it just randomly adds a bunch of reads over a given time period that may or may not make sense in reality. But, it could be useful for a simple 5k where you just want to generate times for a single location.

These are the major items I test, but again if you are doing more advanced things you may want to test other areas.

Perfect. Thank you. Mainly wanted to test my readers and streams.

1. Our race this weekend has two races: 5k and kids mile. The mile occurs after the 5k. I set up a start/finish timing location that asked for latest start time and earliest finish which appears to only work for the 5k. How do I separate out   the kids mile? Is that a separate timing location? Startfinish 5k, start/finish Kid's mile?

2. IDLynx integration. Is this possible yet? I don't see anywhere to generate the files Lynx needs that I usually get from RaceDirector.

1). Most Timers would set up two timing locations for that so that they can set up time filters for each location separately. You can connect a Stream to more than one location so that is not an issue. Just make sure to set the correct timing locations to be used in the Scored Events setup.

2). No not yet, but it's something we will be working on in time for the fall XC season.

Didn't find what you were looking for?